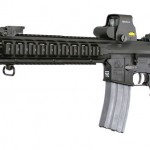 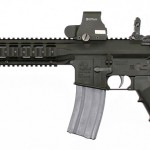 ArmaLite’s “History of Innovation” continues! The originator of the AR platform has turned its popular M-15 SPR Mod 1 system into a “Family of Calibers.”

ArmaLite’s Mod 1 carbine started as a .223/5.56mm carbine built around a revolutionary one-piece upper receiver/rail system with exclusive detachable side and bottom rails.

ArmaLite’s SPR Mod 1 6.8 is especially well-suited to hunting. It is powerful enough to meet the minimum energy requirements of many states for taking medium sized game such as deer. At the same time, the 6.8mm is lighter than the 7.62×51, reducing the weight of ammunition carried into the field. As part of the AR-platform family, this carbine is also more versatile and ergonomic than traditional hunting models. The Mod 1 6.8mm is built with the ArmaLite-developed mid-length handguard and gas system to provide the best in form and function.

ArmaLite’s SPR Mod 1 7.62X39mm provides all the flexibility of the Mod 1’s one piece upper receiver/rail system but now for the world’s most available cartridge. The original AK-47 was built to use this cartridge.

Now, enthusiasts of the 7.62X39 won’t have to settle for less than the best: a true ArmaLite carbine. The ArmaLite designed mid-length handguard and gas tube technology provides an optimal gas pulse to power the 16″ system so reliability is never an issue.

More on the SPR Mod 1 platform:

The SPR Mod 1 is forged, one-piece upper receiver/rail system with exclusive detachable side and bottom rails.

In true ArmaLite fashion, the SPR Mod 1 is like no other on the market.  With other one-piece systems, you’re stuck forever with the rails you get at purchase, and stuck with their limits.

But ArmaLite knows you and your firearm often have more than one mission, and you want options.  ArmaLite gives you just that.  The SPR Mod 1’s three o’clock, six o’clock, and nine o’clock rails are detachable.  That’s right, you can change your 1913 rails to fit your changing needs for sights… lights…lasers…grips…or swivels.

ArmaLite takes that versatility even further.  Each SPR Mod 1 comes with extra rails standard, at no extra cost.  We give you a 1913 rail with quick detachable sling swivel hole.  Each rifle comes with a low insert for when you need a bare rail with a low profile.  There’s also a plain insert with a quick detach sling swivel hole. And there is a half plain, half Picatinny rail as well. Changing your rails…your add-ons…and your SPR Mod 1… is as easy as turning a torx wrench.

Ingenious versatility isn’t the only reason you’ll want an SPR Mod 1.  Its one-piece construction offers you a continuous optic platform (COP).  There’s no gap to bridge between receiver and upper rail when you’re installing your scope or sights.  This one-piece construction also gives the sighting platform extra rigidity.  It’s a good, strong backbone.  That means your sights will stay zeroed in the most trying conditions.

The SPR Mod 1 typifies the “ArmaLite Standard of Excellence.”  With us, quality comes standard.  There’s no extra charge for: the SPR Mod 1’s chrome lined, chrome moly vanadium steel barrel; its two-stage tactical trigger; the patented, extra strength steel bolt assembly; or the hard coated finish.  These are all things that the other companies consider options at an added cost.

The introduction of the new ArmaLite SPR Mod 1 is truly a new chapter in our history of innovation and our dedication to the quality you deserve.

Pineville, NC – PARA USA announced today that it was exiting the rifle market to concentrate on its core competency in handguns. CEO Thanos Polyzos said, “PARA has some exciting new projects in development that will continue the innovation that we started with the high capacity P14-45 pistol. We want to bring these exciting new major caliber handguns to the firearms market and we need to focus our attention on them.”

The Tactical Target Rifle is the best battle rifle in the world. It has the remarkable Delayed Impingement Gas System (DIGS) that makes it the softest shooting, most reliable rifle of its type. While PARA USA will cease production of the Tactical Target Rifle, it will continue its tradition of providing unparalleled service in the firearms industry.

PARA USA will continue to service all of the Tactical Target Rifles it has sold. However, the production and marketing of new rifles using the DIGS operating system will be resumed by Al Zitta, the original developer of the rifle.

The SIG M400™ has been introduced for consumers who prefer the direct impingement gas system and have an inventory of parts and accessories for the original M4-style carbine. Built with SIG SAUER® quality and reliability, the SIG M400™ is also an exceptional value for those seeking an AR-platform rifle.

To increase accuracy over mil-spec carbines, the SIG M400™ features a tensioning device designed into the lower receiver that ensures a tight lockup and eliminates accuracy-robbing play between the upper and lower receivers. The lower receiver has all the same features as the SIG 516™ such as an ambidextrous magazine release and rear quick-detach sling mount. Both receivers are machined from 7075-T6 aircraft-grade aluminum forgings and coated with a durable phosphate finish.

The upper receiver features an integrated MIL-STD 1913 accessory top rail for mounting optics and accepts most M16/AR15-style furniture. A six-position collapsible polymer stock offers adjustability to fit all shooters. An Enhanced version of the SIG M400 features all Magpul® furniture.

Chambered in 5.56 NATO, the SIG M400™ will be available in semi-automatic for commercial users. Three-round burst or fully automatic versions will be made available for military and law enforcement. Built to full military specifications, the SIG M400™ features a 16″ chrome moly steel barrel with a chrome-lined chamber and bore. A direct-gas impingement system operates a seven-lug, rotating bolt. The muzzle is threaded ½ x 28 TPI to accept a variety of flash hiders, compensators or suppressor mounts. An M16A2 flash compensator is included.

A removable sight assembly and carry handle, 30-round magazine and hard case are standard features on this rifle.

WINDHAM — The former owner of Bushmaster Firearms International LLC and other investors have created a new rifle company in the former Bushmaster manufacturing plant in Windham.

Called Windham Weaponry, the company will make rifles and employ up to half of the 73 employees who worked at the Bushmaster plant, which closed earlier this year. More employees may be added before the end of the year, said a media release.

“A group of investors felt there was a great opportunity for a new company when Bushmaster Firearms International LLC decided to relocate the company to another state and lay off all its employees. These employees in many cases have 25 years of experience in making one of the finest rifles in the world,” said the release.

Windham Weaponry will be located in the Windham Business Park and will begin production in July, with initial shipments scheduled for September.

The investor group is led by Richard Dyke, who founded Bushmaster and sold the company to New York City-based private equity firm Cerberus Capital Management in April 2006 for an undisclosed sum.

In December, Dyke said he owned the Windham property with his son, and that they had business plans in the works.

“I would like to attract some kind of manufacturing company, which I might or might not be an investor,” he said. “I can assure you (the property) won’t be empty.”

Dyke added that he had a noncompete agreement with Bushmaster’s owner that expired in April.

“When Bushmaster went out, Mr. Dyke stepped up and said, ‘I will try my best to … bring something back to Windham and to the workers,’ ” Bartell said. “Stepping up like he did says something about his talents and drive.”

Freedom Group announced in December that it would close the Bushmaster plant in March. Bushmaster employed 73 workers.

Freedom Group said it would retain the Bushmaster brand but move the manufacturing of products now made in Windham to other facilities.